Non-Profits, Not-for-Profits, Charities, Organizations – Why you need a button maker!

Non-Profits, Not-for-Profits, Charities, Organizations all need to raise funds for their causes.  There are many ways to do this.   Many of them get into the junkmail business, many canvas door to door or on street corners.  Many of the canvassers do not even care for the cause and are paid quite well for bugging people.  The large charities employ sub-contractors to knock on doors and if they make a sale of, say, a $10 monthly subscription the first 2 years or as much as $240 will go to the sub-contracting company and only the subscriptions in the third year and beyond benefit the charity.  I know I’m going to get angry emails from the large charities telling me “It’s only the first years subscription that goes to the sub-contractor” but whatever the deal is and I know they vary, I don’t think the generous subscriber new they were filling the coffers of the for-profit canvassing company. Full disclosure and real volunteers would be a better way to go, but I actually believe these charities harm their image when they call people on the phone during dinner or knock on doors when people are relaxing (or sleeping).  As for the junk mail?  That’s just got to stop.  Our household has given annualy to possibly 10 charities for years.  We probably get more than 1000 letters a year.  Yes averaging more than 3 unnecessary letters a day.  You could argue that’s a lot of trees but it’s also a lot of cash that should be going to saving whales, fighting climate change, or building women’s shelters.  It should be used for whatever the money was actually donated for.

Fundraising with buttons is extremely low cost, fun, attracts new subscribers and interested parties and does not bug anybody because people come to you!

There are many ideas for using buttons to fundraise and I will layout a few ideas to show that instead of sending junk mail getting a button maker is a better investment.

1) Buttons are a low cost way to promote your organization.  Get your name logo out there.  It’s obvious but simple.

2) But what about a “Make your own buttons table” in front of your office, at street festivals, yard sales, schools, universities or any public events.  As well as your button maker you need blank circles, crayons, pens and markers. Get people to draw their designs and put it in a button for them right there and then. People will flock to your table and as they come they will bring more people (naturally, you don’t have to set up a robocall)  Make it for a donation for your cause and you will get $5, $10 for a button that costs 8 cents.  I once even got $50 for a single button because the donor believed in the cause.  You should also have your own designs available at the table for people who don’t want to draw.  Not just a button with your logo but a load of buttons that are relevant for your cause.  Make them funny, make them pertinent, make them serious. Make some radical and some gentle.  Have buttons that describe the full array of your cause with humour and with passion.  All the time people stand at your table, reading your button designs, more people will come. ( You won’t have to bludgeon anyone with your clipboard anymore, they will come to you.)

Do get a graphic designer to design your buttons!  Good design is the key!!! 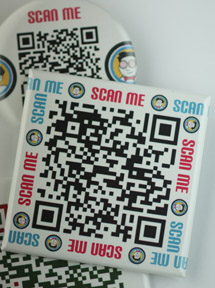 3) Got something interesting on your website? Draw traffic to the page with a QR code.  What’s a QR code?

Pin-back buttons, pins, badges or whatever you call them are an ideal vehicle for promoting websites but what about a button that can be scanned on a cellphone and the image takes the cellphone user straight to your website.

QR codes don’t just need to go to a homepage, you can generate a QR code to lead a browser to any web address, to a special offer page, to a secret page or a surprise page.  Follow a QR code button and see where you end up!

4) Use your button maker as a tool to leverage volunteers.  If you have a large number of volunteers coming in to help then that’s great but you need a way to utilise that people power.  You also need a way to give those that do volunteer a sense of satisfaction, the sense that there voluntary labour was put to good use.  I used to be involved in an organization that had lots of walk-in volunteers. I found that if I invested time in explaing tasks to them I would sometimes be dissapointed as they could loose interest and drift away.  On asking I found they often thought the volunteer jobs pointless.  But explaining to a new volunteer how to make buttons takes literally a minute or two.  They work away at making buttons and as the finished buttons pile up they get a sense of achievement. You can use the button maker to judge staying power in your new volunteer.  Once they have proved themselves making buttons for your next event, you can invest some time and take them to the next level, they have earnt it.

5) A printing press in your office.  Once you get good at making buttons you can publish a new button even daily, it takes minutes. As and when a new campaign slogan comes up, a reaction to a press release or a new idea formulates; put it on a button.  Have new designs on the website with a pile of freebies at the front desk for drop ins, for a donation or otherwise. Those buttons will go forward and spread the word. Let your supporters spread the word for you.

Comments Off on Non-Profits, Not-for-Profits, Charities, Organizations – Why you need a button maker!